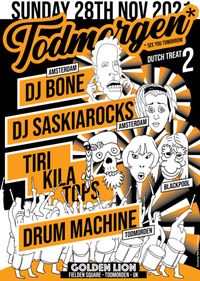 Todmorgen at The Golden Lion, Todmorden

Drum Machine have not played at The Golden Lion since it first opened a few years ago. We are very excited to be playing there again.

No tickets necessary. Just turn up!

TODMORGEN - Dutch for ’See you Tomorrow’- is a new series of bi-monthly events bringing over Dutch night-delights to the Golden Lion, and Todmorden to the Netherlands too.

Amsterdam’s DJ Bone (no one knows his real name, but he’s called Tall Bjorn, not to be confused with Amsterdam’s Fat Bjorn, who is someone else) is a Rock&Roll-er by profession. He’;s been in more bands than two hands can count. And is a world renown Dj in the garage-punkrock scene. He’s been playing from Dracula’s real castle in Transylvania to Casino’s along te Rivièra and Las Vegas and lots of dark cellars in-between. When he’s not touring he’s making artwork for other bands. He’s created a one man universe of his own. In Amsterdam he’s been personally responsible for booking hundreds? of garagepunk bands from all over the world, and now he’s finally going to experience the Golden Lion. Amsterdam’s DJ Saskiarocks (Saskia van der Klei) grew up in Abu Dhabi and became an undeniable icon in the Amsterdam fashion and partyscene.

Her nom the guerre involves playing at Linda de Mol's birthday party (yes google that) till being kicked out of a garagerock venue for playing Miley Cyrcus. She is the founding mother of 'Cirque Exentrique’. And when she is not Dj-ing or at he tennis court she spends her days hanging out with Mario Testino, Karl Lagerfeld(rip) and Tommy Hilfiger, who fly her in regularly to style handbags in fashion shoots! (yes ladies, someone’s got to do it)

For the Lion’s regulars Tirikilatops needs no further introduction as they've played with us before. This Korean/UK's earworm K-pop electro-punk trio has been rocking stages from Japan to Blackpool. And now with their new record out on Golden Lion Sounds... and the Dutchies spotting them… it might be one of the last chances to catch them on a small stage! Hebden Bridge’s 'Drum Machine' speaks for itself: Be There, or Run Away! It’s up to You.